This year’s Moscow City Duma elections are surrounded by unprecedented levels of police violence and political persecution. Mayor Sergey Sobyanin and his team do everything in their power to not let the independent candidates win a single seat at the September 8 elections. Most of them are currently under arrest, and almost 1500 people were detained during the protests in their support on July 27.

In their newest investigation, the Anti-Corruption Foundation has discovered the real reason for such paranoia: if independent candidates become city duma deputies, they will immediately learn about countless fraudulent schemes and financial crimes that members of the Moscow government and their relatives commit every single day, and start talking about them publicly. This might result in multiple criminal cases, resignations and asset forfeitures.

Luckily, there is no need to wait for this to happen anymore. ACF investigators have managed to uncover the entire scheme remotely. Billions of rubles have been stolen from the city budget, and today, we will tell you in detail how it was done, who has profited off of that and how they’ve spent this money.

The key figure here is Natalia Sergunina. She is the first deputy of mayor Sergey Sobyanin, which officially makes her the second most important person in Moscow. Moscow City Duma website lists her as the one in charge of all kinds of elections in Moscow. This makes her directly responsible for all the atrocities of election commissions towards the independent candidates and thus, for all the resulting mass protests. 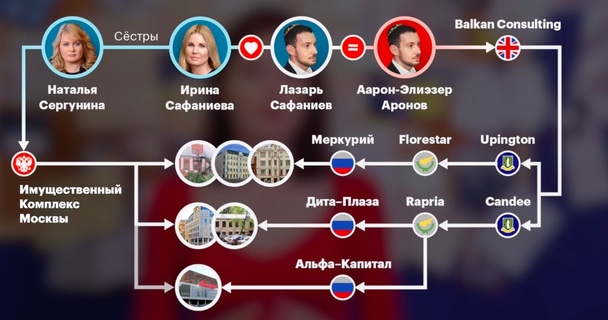 For nine years before that, Sergunina has been the head of the Moscow City Property Department. She was in charge of the city property, which provided her with limitless opportunities for self-enrichment. Thousands of buildings in Moscow belong to the city itself, and until last year it was Sergunina’s job to rent them out or sell them. In order to sell a city property, Moscow government needs to issue a special decree and put out a tender for its purchase. All profits from the sale go straight to the city budget.

This is where the oddities begin. In the summer of 2016, a company by the name of OOO «Merkurii» bought several historical buildings in the center of Moscow and opened hotels under the Custos brand in most of them. One building was left abandoned for two years and then sold back to the city in exchange for TWO other buildings with a significantly larger area. The purchase price was always significantly lower than the market value of these buildings. In all these cases, «Merkurii» was the single bidder. Moreover, three of the buildings were bought for exactly 466,150 rubles more than the starting price set by the mayor’s office.

From here on, things get quite complicated. OOO «Merkurii» is owned by a Cypriot offshore company called Florestar, which, in turn, is owned by another two offshore companies registered in the British Virgin Isles. One of them, Upington International Limited, owns a London-based company Balkan Consulting Limited. The beneficiary of this company is one Aharon Elizier Aronov. Aronov’s other name is Lazar Safaniev, he changed it to Aharon Elizier Aronov after becoming an Israeli citizen. Safaniev’s wife is Irina Safanieva, nee Sergunina, the younger sister of Natalia Sergunina. The circle has closed: Natalia Sergunina has sold city property worth hundreds of millions, if not billions, of rubles, to her own brother-in-law.

Also in the summer of 2016, two more buildings were purchased from the city through an identical scheme by OOO «Dita-Plaza». It’s owned by a Cypriot offshore company Rapria, which, in turn, belongs to Candee, another BVI offshore company owned by Lazar Safaniev’s Balkan Consulting Limited. Rapria has another Russian subsidiary, OOO «Alpha-Capital» that purchased 40% of «Oktyabrskyi», one of Moscow’s most famous and profitable cinemas, back in 2013.

Sergunina’s sister Irina Safanieva somehow received the rights to use two exhibition halls at the VDNKh exhibition center and turned them into restaurants. The restaurants are run by two companies, «Ladim-N» and «Taurus» that have the same directors as «Merkurii» and «Dita-Plaza». Safanieva proudly lists both restaurants in her designer portfolio on her personal website. The portfolio also includes another restaurant, Wine Time, which she used to own personally. The restaurant went bankrupt, and now another restaurant was opened in its place, but Safanieva still owns the premises. These premises are worth 470 million rubles. How Safanieva managed to earn enough money to purchase them, remains a mystery. It’s worth noting that before these restaurants, she had only designed her own apartment and the apartments of her friends.

Natalia Sergunina’s family also has an impressive collection of Mercedes Benzes; her mother owns two, her father has one, her sister Irina has two, and, finally, Irina’s husband Lazar Safariev owns three.

Alexander Sergunin, the father of Natalia and Irina, owns a 350 m2 apartment worth 215 million rubles in one of the towers of Moscow International Business Center.

If we go through the assets that Sergunins have already re-registered in the names of their friends or nominees, we will also find two apartments worth a total of 248 million rubles that they purchased back in 2011.

This only covers Sergunins’ Russian assets. As we all know, Russian crooks prefer to keep most of their money abroad. According to the financial reports of Balkan Consulting Limited, Lazar Safaniev owns some sort of a real estate asset worth over 10 million pounds (826 million rubles). It is currently unknown what this asset is.

Safaniev and his wife also own two Austrian companies. The first one is HMG 34 Projekt GmbH. In 2015, it purchased a detached house in Austria, not too far away from the mansion owned by the family of Alexander Metelskiy that we talked about in our previous investigation. The second one is Lazar-Multimedia Technology GmbH. It’s currently building a theme park based on «Alice in Wonderland» in Vienna.

According to Sergunina’s official asset disclosure, she has no income apart from her salary and only owns a modest three-room apartment on the outskirts of Moscow. However, our investigation shows that this is very far from the truth. The total value of the assets owned by Sergunina’s family is around 6.5 billion rubles ($100 million). We hope that one day, all this stolen money will be returned to the citizens of Moscow.